Over the many years I have given my handcrafted clocks and other décor to family and friends as gifts, I myself had never thought of sharing the “story behind the gift” to make the item even more cherished.

All that changed last year when I started to make and give away tiny hand carved crosses, made from an old weathered chunk of wood from my past. 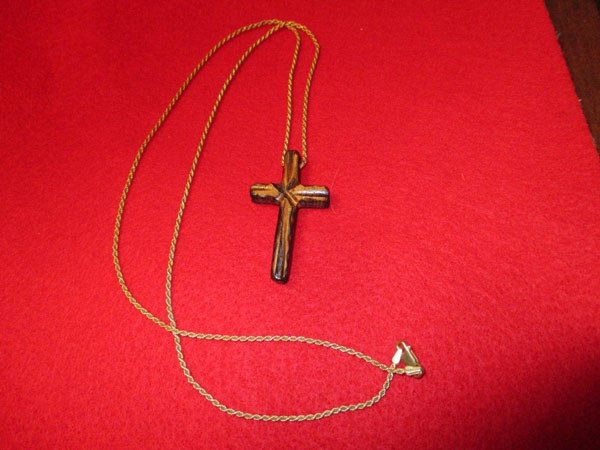 Back To Where It All Began

In the summer of 2003, I was in the area where I had grown up and decided to drive by our old farm. I already knew all the buildings were gone. What was once a very typical family dairy farm was now a 160-acre potato field, but the place of my childhood still beckoned me to drive by.

As I approached the southeast corner of our farm, I noticed a large pile of rocks that had been removed from the fields over many years. I decided to stop and bring a few of these rocks home as souvenirs. As I was walking through the tall grass to get to the rock pile, I tripped over something and fell. I picked myself up and kicked the object up out of the grass and immediately recognized it as one of the oak fence posts my dad and I made back in the mid 1950’s to fence in a 40-acre parcel as pasture for our cows.

As I held the badly weathered, partially rotted fence post, the cherished memories of working with my dad in the dead of winter to cut down and cut up oak trees came flooding back. Thinking maybe someday I would figure out something to do with it, I brought the old fencepost home and leaned it up in a corner of my shop, where it quickly became buried and forgotten.

In the fall of 2013, however, while working on woodcrafts for an upcoming show, I uncovered the post and got the idea to make wooden pendant crosses to give to my family. After finishing a few of the crosses, I decided to jot down some notes on their origin to include with the little gifts. I did not think anyone would be all that interested in the story, nor really appreciate the significance the story had for me. I was so wrong!

After making many of the cross pendants for family members and friends, it has been truly gratifying to see how much the story behind the gift means to everyone. Now I always make sure my handcrafted gifts include the story behind them, and I encourage you to do the same. Remember, the story will forever link the gift to you and make it even more special as an heirloom.

John spent the better part of the 28 years he was employed by Klockit, designing hundreds of clock and furniture kits and plans and has continued with product design since his retirement in 2008. John’s love of clocks, his passion for creating furniture for his own home as well as for family, and his great appreciation for the beautiful finished pieces Klockit customers make from our kits and plans inspire him to continue to create still more new clock and furniture designs.